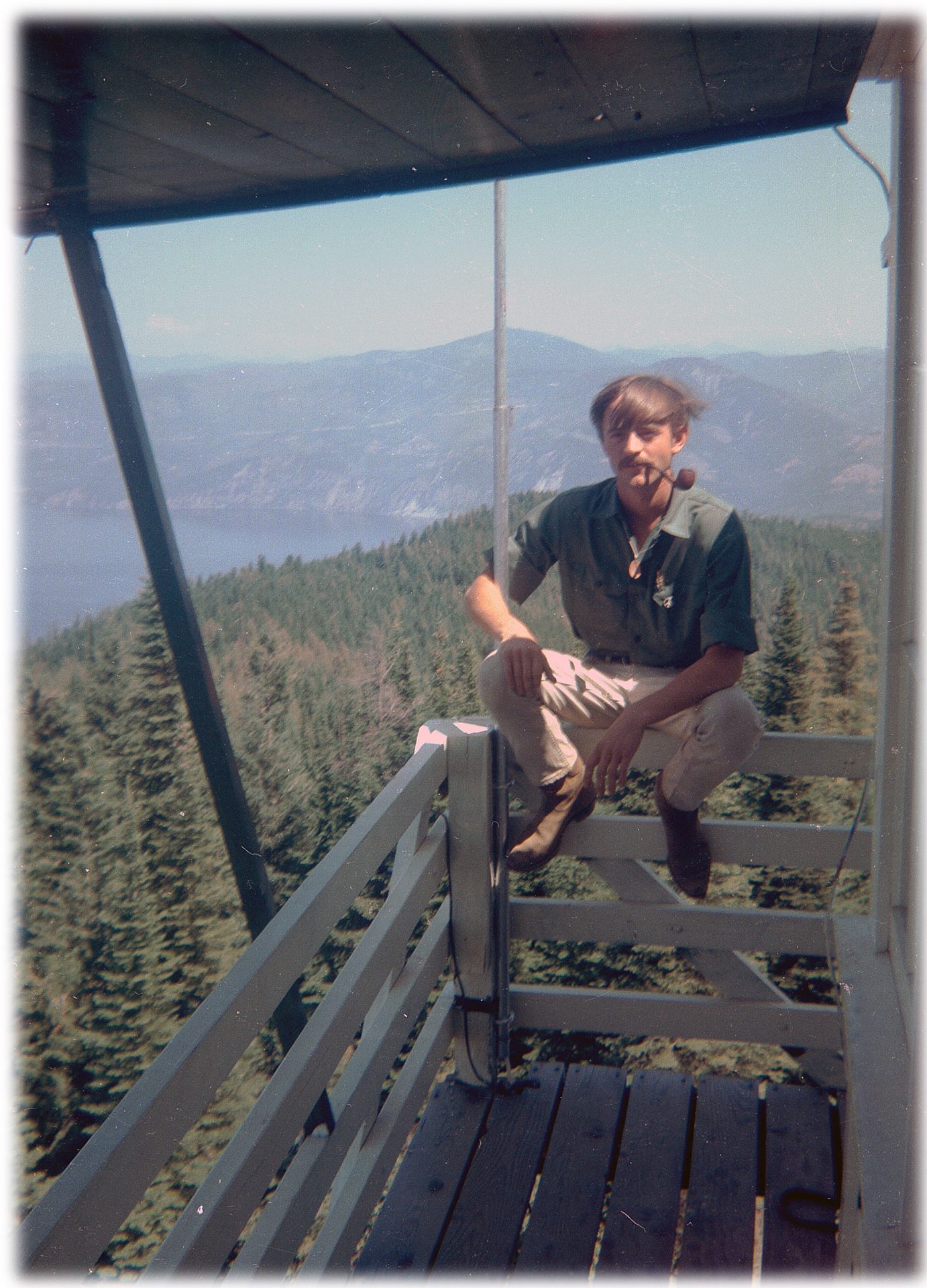 Tales From A Lookout

Whoever named the mountain, probably did so after Bernard of Clairvauz (1090 - 1153 AD) who later became Saint Bernard. The peak’s name seemed appropriate. Bernard, like me, was one of seven children — close enough, I was one of six children. Bernard had a great taste for literature and devoted himself for some time to poetry. Me, too. His success in his studies won the admiration of his teachers. Same here. Bernard wanted to excel in literature in order to take up the study of the Bible. He had a special devotion to the Virgin Mary. Not me.

Before taking possession of my 40-foot lookout tower — monk’s cell — I spent the first two weeks of the fire season clearing trail in the mountains south of Lake Pend Oreille where I used a chainsaw for the first time — a situation of look-and-learn.

The USFS believed in hands-on training. Put your hands on the chainsaw, cut off your leg. Well, almost. The rip in my jeans from mid-thigh to mid-calf told the story. Flesh intact, I returned the saw to the crew boss, saying: “Next time, I’ll wear those safety chaps.”

Fortunately, there was no next. At the start of the new week, the fire control officer posted all the lookouts to their respective towers. I wasn’t particularly enthusiastic about mine because it was road accessible. Consequently, no shortage of visitors, especially since the venue for 1967 World Boy Scout Jamboree was in Farragut State Park at the west end of Lake Pend Oreile.

My lookout tower perched atop 5156-foot Bernard Peak offered an excellent view of that event. It seemed as if every Boy Scout in the world came calling. Finally, out of the need for privacy and out of necessity because of visitors who frequently interfered with my work, I nailed a sign to the bottom of the tower: “No visitors except by permission of the management.” While this arrangement pleased me, it displeased quite a few would-be gawkers.

However, in one case, I reconsidered my edict when a reporter from Radio Denmark requested an interview and promised to broadcast a human interest story to his compatriots. So up the stairs climbed Ichabod Crane dressed in a Boy Scout uniform replete with knee socks and garters, toting a tape recorder, camera, and binoculars. He went about his business which included taking my picture. When he departed, I couldn’t remember a single question he had asked or any of my replies because I was too focused on preparing lunch.

By the time August rolled around, my “no visitors” sign became superfluous and welcome. Reason: Extreme Fire Danger! The forest closed down to all users, pedestrian and vehicle alike. Finally, solitude, but at a cost. The forest was a tinderbox. One thunderstorm would ignited it. And did. The forest exploded.

Conflagration! In one night on 30 August, a 35-acre fire at the north end of the district near the Priest Lake area expanded to 2,000 acres — the infamous Sundance Fire. In the late afternoon of the following day, as the district’s southern most lookout, I reported gale force winds sweeping in from the south causing my fire tower to sway like a reed caught in the current of a rushing stream. When the wind struck the fire, it moved with such force that it traveled approximately sixteen miles in nine hours, destroying over 55 thousand acres of land and about 10 million board feet of lumber.

The northern most lookout, Randy Langston, on Roman Nose Peak, was ordered to abandon ship — hike out to the nearest logging road. But, he hastily retreated when the fire swallowed the road. Next, he was ordered to return to the lookout site and shelter in the rocks below the tower where he spent the night on a narrow ledge under a rock overhang as flames leaped over him in their race north. That night, he flooded the radio with his running commentary on the fire’s progress. In the morning, a helicopter rescued him. On their flight in, the crew spotted two firefighters who’d taken shelter beneath a bulldozer. When the helicopter crew reached them, they were dead — asphyxiated when the fire consumed all their oxygen.

After the fire finally burned itself out, my former fire control officer Dick Turner — from my previous summer’s job on Big Hole lookout — showed up. He’d been a fire boss on this blaze and told me he’d seen the ash outlines of elk and deer where they’d been incinerated in-place as the result of the firestorm’s temperatures of 3,000o F and 95 mph winds.

Finally when the fire season ended and Fall weather had established itself bringing rain and snow, Roy, an early visitor to the lookout, returned for our previously planned trip into Canada to climb Mt. Robson. The journey turned out to be a road-trip because early winter snow storms made climbing in the Canadian Rockies too hazardous for novices like ourselves. Since we had to return to the US in time for the start of Fall Quarter classes, Roy deposited me near the Idaho-Montana border where all the east-west traffic going over Lookout Pass had to transit through Mullan, ID, via Highway 12.

Late in the afternoon, Roy left me standing in the parking lot of an all-night truck stop trying to hitch a ride into Missoula. Complete with full backpack draped with climbing gear, I was still “parked” in front of the truck stop — at midnight, under a street light, in a driving snow storm. About one o’clock in the morning, a long-haul trucker offered me a lift in his giant tractor-trailer rig. When he opened the passenger side door, the bottom of the seat was level with the top of my head. For a moment, I thought I’d have to rope-up just to climb in. Once inside, what a view! Like standing atop Bernard Peak.

The trip into Missoula was exceptionally smooth. The driver knew his stuff. Just by the sound of the engine, he could shift gears without using the clutch. Missoula at dawn. He deposited me at the corner of Highway 12 and Madison Avenue about 1 mile from my new apartment. On the walk home, I thought about my summer’s work, the journey through the Canadian Rockies, and the hitchhiking adventure. Revitalized by all this, I concluded that sainthood wasn’t my strong suit. Not by a long shot.