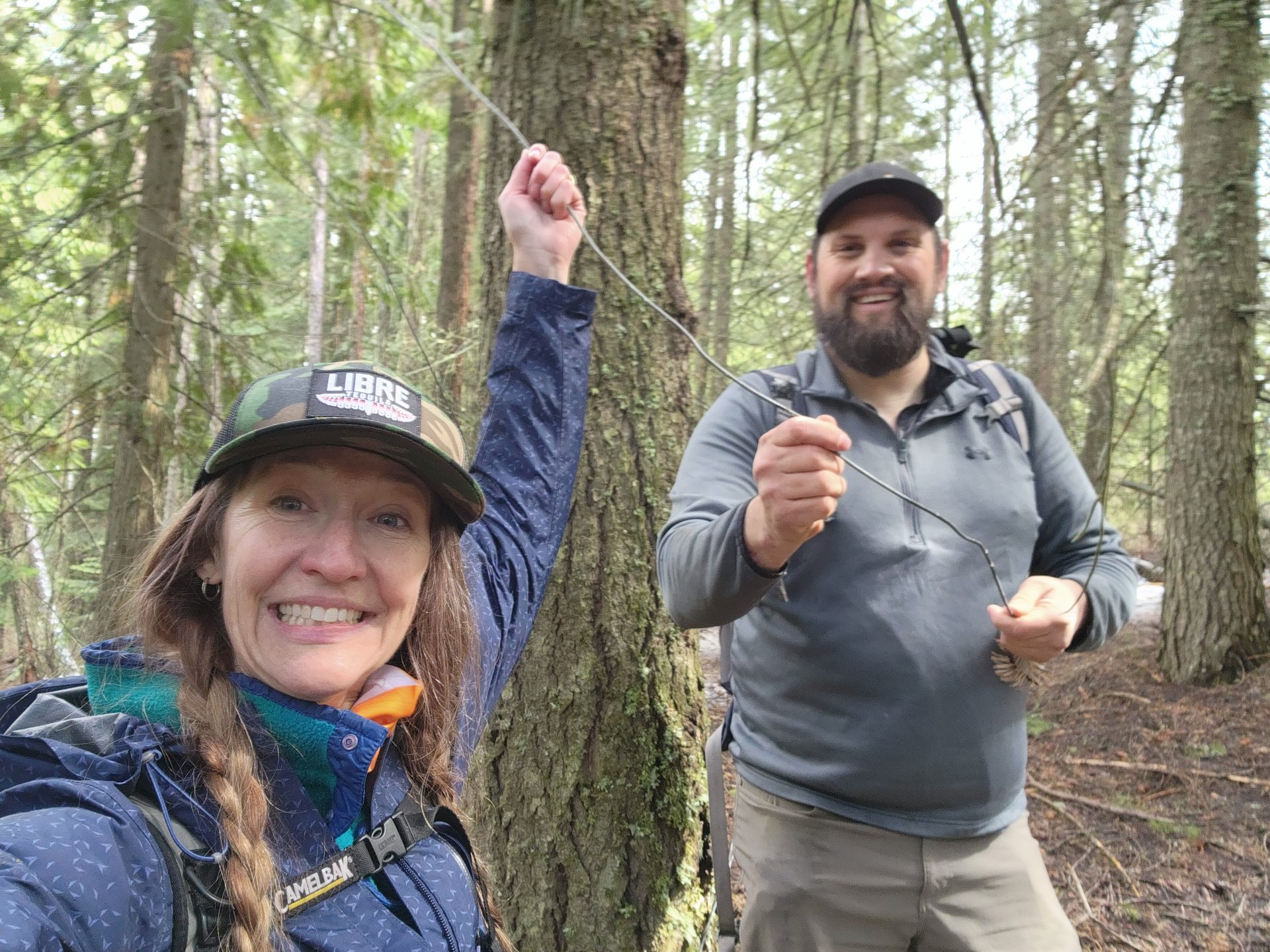 You may be familiar with Mable Gray; she is accredited as the first lookout for the forest service in the Western U.S. She was a lookout on what is now known as Bertha Hill, the current home to an L-4 tower. But when she watched for those smokes, she did so from a perch in a tree!

Even as lookouts with full cabs and living quarters were developed, tree platforms or crow’s nests were still used. We had not seen any of these in person yet. So on an early April morning, Cat and I set out to find our first crow’s nest. We had not located a single photo of Three Trees Butte and were unsure when anyone last laid eyes on it. It was last staffed almost 80 years ago, and you have to assume there isn’t much left of something like that.

We drove a few hours south on U.S. 95 before turning onto ID 6, cutting through Potlatch, Princeton, and Harvard.

We had planned on driving up a forest service road, but that was blocked in by a 4ft snow berm. We were not about to be sidelined by a bit longer hike, so we parked on the side of the road and began our journey. The 2/3 of the mile up the road felt much longer than it was as we constantly sank up to our knees and thighs in soft, wet spring snow.

Eventually, we reached the trailhead. Luckily, the thick forest canopy had kept much of the snow from reaching the forest floor. The next .6 miles were done with relative ease.

Finally, it was time to break off the trail to head up to the hilltop where this crow’s nest was. Downed timber littered the side of the hill, reminiscent of the world’s most giant game of “pick-up stix.” After picking some creative lines over and around log after log, we made it to the top.

Convinced that I could see the crow’s nest from the sky, I launched my drone through a small clearing while Cat set out on foot to search.

The drone’s wind warning was alarming as the weather changed. A hail storm moved in, and I should have brought the drone in, but I was determined to find this crow’s nest. I monitored the battery percentage closely as it dropped faster than usual while performing a grid search of the entire hilltop. I was disappointed to have not found anything with the drone’s camera and brought it back to my clearing for a very stressful landing. The wind tried to snatch the drone up and slam it into a nearby tree as I navigated the drone through the trees and to my landing area.

I assumed Cat hadn’t found anything as I had not heard any screams of joy and excitement. It was a bummer to share our bad news with each other. But as sad as it was, we admitted that the odds of finding it after being abandoned for 80 years were probably slim.

Defeatedly, we made our way across the hilltop, back towards where we climbed up; we zagged and meandered to cover as much ground as possible. This worked out pretty well for us as Cat eventually walked smack into a #9 galvanized wire dangling from a tree.

She hollered, and I ran to meet her. Jumping around like idiots, we snapped some photos. The wire ran up into a tree, and as we studied it, we could eventually make out pieces of a platform that had once been strung up between two trees. Some old nails and obvious spike holes on the trees helped confirm that we had found the spot! I also saw why I had not seen it from the air. The platform was only about halfway up the tree and well below the forest canopy.

It would have been easy to miss, and as the years fly by, I’m sure the remaining signs will continue to wear away until they are no more.

We saw a can that was probably close to 100 yrs old and further evidence that someone had undoubtedly spent time on this hill. We took photos and videos to document it.

The walk was much shorter as it was full of chatter about this fantastic find. We couldn’t believe that we now had the first photographic evidence of this crow’s nest that we had ever seen. We also made plans to dedicate the following weekend to finding another crow’s nest.

A week later, we set out to find the next crow’s nest, one along the St Joe river, and I hate to report we weren’t as lucky. I’m 99% sure we actually did locate where it was, but the area had been logged, and we believe this lookout was lost to the modern world.

We’ll continue to try our best to find and document this exciting part of lookout history before it completely disappears. 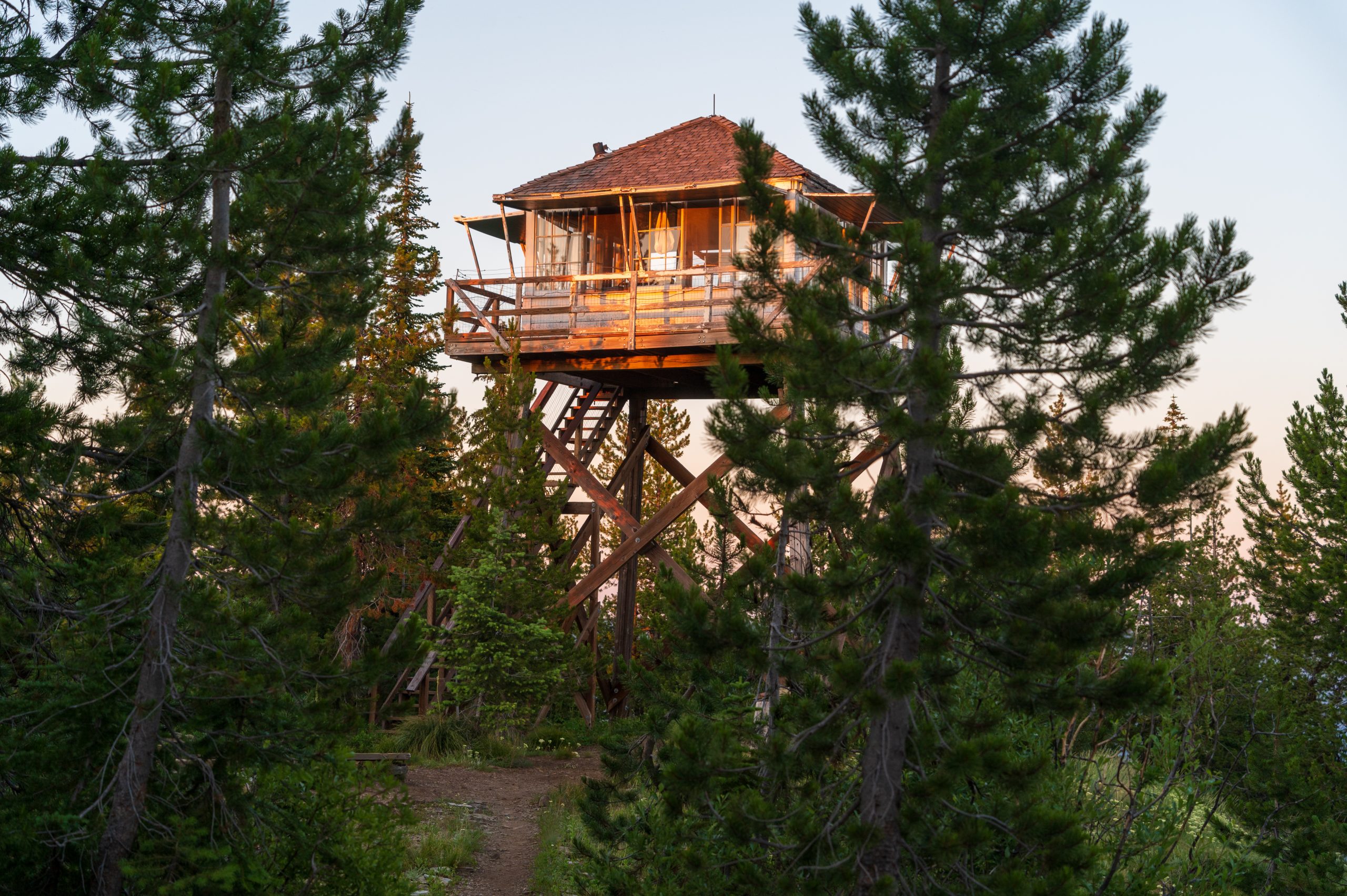 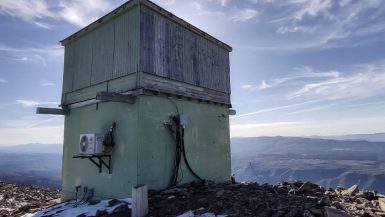 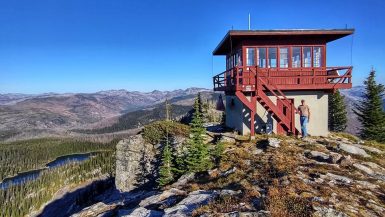